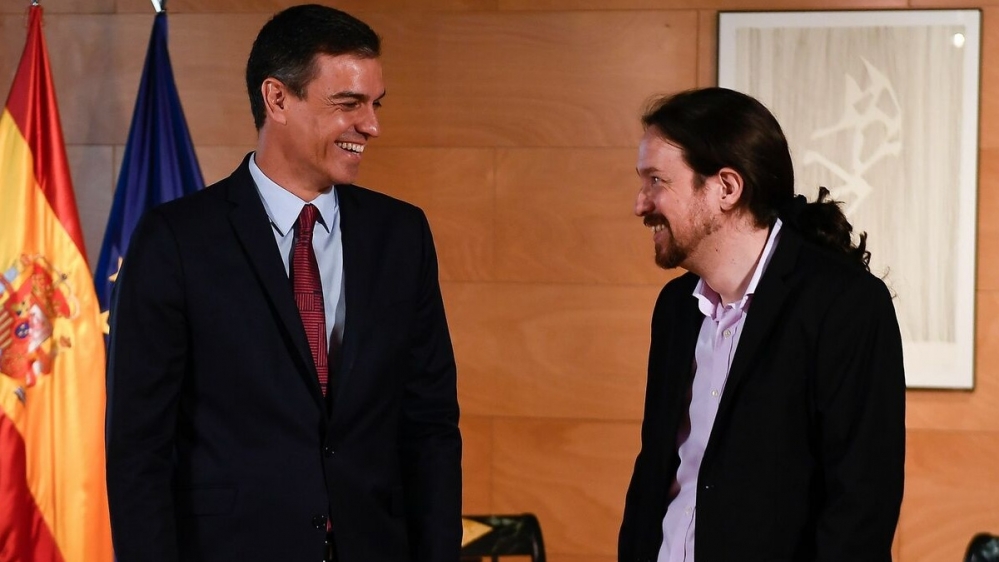 Spain is on its way to become a copy of Maduro's Communist Venezuela? Spanish political landscape by Rodrigo Ballester.

Spain now: 43 945 deaths (roughly 15 000 more than the Government official figures), the highest rate of infection in the world among medical staff, one of the strictest confinements in Europe, the sixth highest rate of mortality per million inhabitants in the world and the worse economic forecast among OECD countries. This is a snapshot in pandemic times.

Those figures speak for themselves about the calamitous management of the first Covid 19 outbreak while the second is devastating this country again. In between, the Spanish Premier heralded “Spain defeated the virus”, invited his nationals to “enjoy the new normality” and found the time to go on holidays three weeks in August while the second epidemic was spreading all over the country.

But please, do not jump into conclusions and assume Pedro Sánchez and his troupe were missing in action. They were not. After all, a genuine socio-communist coalition will never waste a major crisis to undermine the foundations of the legal order from within, especially when demonstrations are restricted and the population is sedated by months of confinement and monochrome TV propaganda. Since March, the Spanish government tabled a law on education that restricts parent’s freedom of choice, opens the gates of indoctrination and adds an extra burden on semi-private schools (they account for 25% of the pupils and are mostly catholic).

It put on the table a new legislative proposal on “Democratic Memory”, a crass attempt to rewrite Spain’s Civil War through blatant manipulation and censorship.

Moreover, Sánchez also proposed a fast-track legislation on euthanasia that totally contradicts the opinion of the National Bioethics Committee and will put forward a new legislation on abortion to make it even more accessible (for example for minors without their parent’s consent).

Yet, this is only the tip of the iceberg, Sánchez’s record sheet is even brighter on the institutional façade. Sánchez nominated his former Minister for Justice as Chief Prosecutor, a smart move to keep an eye on a couple of corruption files of its coalition partner and his own party and to deactivate the criminal lawsuits stemming from his management of Covid 19 crisis. Please note that the EU’ unleashed the dogs on Poland for taking exactly the same decision. Not on Spain. Besides, Sánchez made a gross attempt to take command of the General Council of the Judiciary a couple of days ago tabling a legislation that bluntly violates the Spanish Constitution and represents a coup against the separation of powers. Furthermore, the Judiciary Council reprimanded three times the Government in only ten months to protest against the incendiary criticism of its Vice President and leader of Podemos, Pablo Iglesias. Unprecedented attacks in 40 years of democracy.

While the judicial power is the last barrier against Sánchez’s thirst for power, the socio-communist government points its gun at the cornerstone of Spain’s political system: the Crown.  An easy target if one is coward enough as this institution is subject to a strict duty of reserve and can simply not defend itself from any criticism. Yet, Podemos took advantage of the pandemic to launch systematic attacks against the King accusing him, among other things, of plotting against democracy for simply placing a private phone call expressing his discontent after being vetoed…by its own government in a ceremony in Barcelona. Furthermore, the Government fuels the debate on the Monarchy while according to the latest polls this is a priority for 1% of the Spanish citizens.

And all that, under Sánchez’ cynical and satisfied silence, as Nero playing the harp while Rome is on fire.

Finally, ideological blindness does not spare the private sector.  How could it be otherwise when the Sánchez’s coalition lies on dogmatic university activists who read all of Marx, admire Chávez’s Venezuela but never worked in a company? In the midst of the pandemic, employers’ organizations were ignored, dismissals prohibited, self-employed persons set aside from public aid schemes and the touristic sector (Spain’s gold mine) was decried and air companies sued by the (communist) Minister for Consumer Protection. At the same time, the Government established a permanent universal income and the draft budget for 2021 presented this week foresees an increase of public salaries along with tax increases, rent caps on real estate and the highest level of public investment ever. A draft budget that is in deny of the pandemic, but not of the coalition pact.

Spain’s current situation is the chronicle of an announced historical disaster, the unexplainable hara-kiri of a nation that successfully opened a magnificent parenthesis of prosperity forty years ago and is now about to close it brutally. A country caught in the perfect storm and whose fate is in the hands of the worse possible captain.

The story of a political coalition, which is the marriage of a pathological mind cunningly tamed by doctrinaire communists who see in the pandemic the golden occasion to turn Spain into the new Venezuela.

On the one hand Pedro Sánchez, an unscrupulous adventurer, an incorrigible poker player, a compulsive liar with despotic tendencies and a confirmed narcissist obsessed by power and vanity. On the other, Podemos, the new name of Marxist-Leninism in Spain, a vindictive political movement that openly aims at overturning the current political system from within because it is too “franquist” to their taste. Moreover, a political movement whose structures and satellite organizations received generous amounts of petro-dollars from Iran and Venezuela in the last years. Finally, a party largely run like a Sultanate by Pablo Iglesias, the current vice-president of the Government who sits next to his partner in the Council of Ministers…as he appointed her. Is that what they call “women empowerment”?

Both sides of the coalition abhor each other but share two important things: a deep managerial and technical incompetence and a sharp talent for agit-prop and political marketing sustained on the complicity of the immense majority of TV channels. To complete the coalition, the former Basque terrorists, Catalonian independentists and Basque nationalists, all of them fierce enemies of the Monarchy. In other words, the Spanish government is the sum of the country’s public enemies.

With one tenth of the seats in the Parliament, Podemos takes advantage of Sánchez’ megalomania to run the show of the coalition. At the shade of the pandemic, it steadily deploys a social, cultural, political and economic agenda that is disfiguring the Constitution and slowly turning Spain into a proto socialist regime where the power of the State progressively expands. Indoctrination in schools, historical revisionism, radical feminism, identity politics, euthanasia, authoritarian reflexes, attacks on the Crown, divisive politics,  hold-up on the Spanish public television, universal and permanent minimum wage, uncontrolled public debt, deterrence of foreign investment, intimidation of the judicial power…a large array of salami tactics that might sound too familiar to central European countries.

This nightmare is occurring in the EU’s fourth greatest country amongst general indifference of international media and, most worryingly, of the Spanish society. Recently, the Parliament accepted to grant special powers to the Prime Minister for…six months, under the sole obligation to report (without any vote) three times to the lower chamber. A six months self-imposed tyranny? It looks very similar. Who dared invoking the Rule of Law? None of those who wave this flat compulsively against other countries. Spain is the sick man of Europe, and not only on account of the economy.

May God save Spain and its King, especially from its own Government. 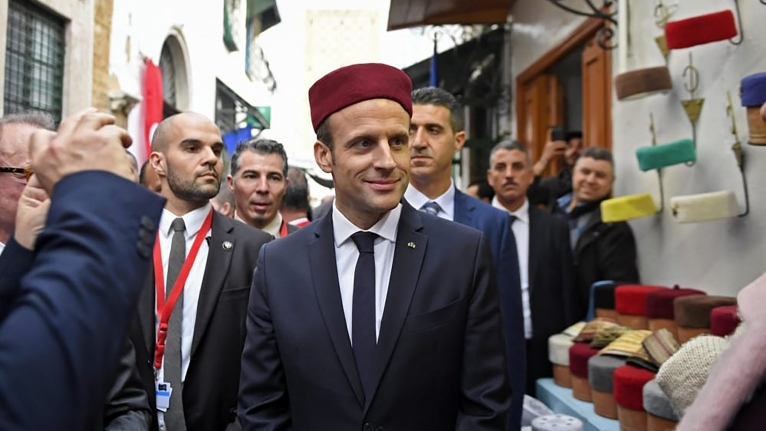 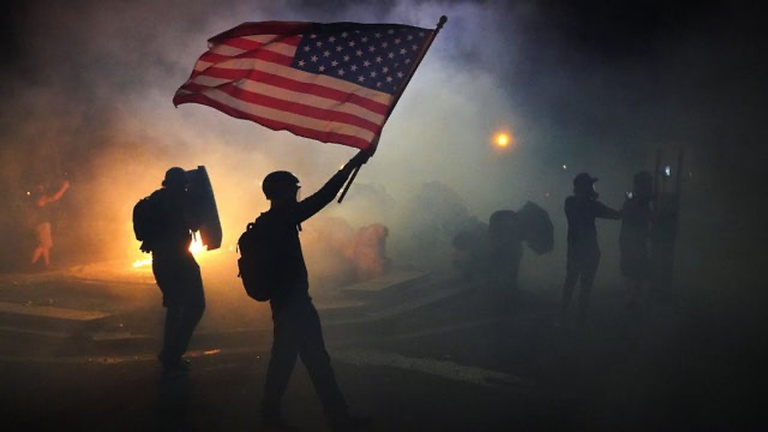