The Officers' Casino is the talent and education center of Mathias Corvinus Collegium (MCC) in Pécs.

Now that MCC has taken over the property, the complex between Maria Street and the square intersecting Király Street can once again be restored to its former glory. According to the plans of Mathias Corvinus Collegium, the building will be not only renewed, but also filled with life. Befitting the former Officer's Casino, it will become a base for talent development in Pécs.

Located in Király Street, opposite the Pécs National Theatre, in the very heart of the city, the building in need of renovation has a magical past. According to historical records, in 1695, the site was already occupied by single-storey houses. From 1737 onwards, an inn operated at this location for some time. However, the building is most famous for being the birthplace of Professor János Ranolder (16 May 1806 - 12 September 1875), son of the master glove-maker Ferenc Ranolder, who later became bishop of Veszprém, and who made an invaluable contribution to the development of viticulture and wine culture in Hungary. From 1839 onwards, the property was gradually purchased by the National Casino of Pécs and converted into a building with a classicist façade.

Not only did the members of the Officers' Casino regularly give to charity, but also sought to educate young people and cultivate their historical knowledge. In this spirit, in 1859 an annual prize of four gold pieces was established to preserve the memory of István Széchenyi. For many decades, a writing competition was organized for school children in Pécs. In 1860, the son of István Széchenyi, Béla Széchenyi, famous geographer and traveler, was accepted as a member of the Officers’ Casino. In 1895, during the foundation works of the new casino building historical monuments of Turkish times were brought to the surface. The new building was constructed in an eclectic style, based on the designs of Imre Schlauch. In 1914, not only did the casino donate money to the local Red Cross hospital, but also offered rooms for the care of the wounded. In 1921, the communists smashed the windows of the Casino, which did not compromise its operation, but after World War II it was closed down for ideological reasons. After the war, the building was used as a community center. Later, it was owned by the Communist Youth League, and then it was used as a garrison club (Armed Forces Club). Lately, the building has been empty for many years, and several attempts have been made to sell it, without success. Meanwhile, time left its mark on the historically significant building.

Mathias Corvinus Collegium Foundation aims to make its free talent development programs available to as many young people as possible. Therefore, MCC is gradually expanding its activities in key university towns, including Pécs. After being completely renovated, the property will be used as an education and talent center, and as a residence hall for around 150 young people. In addition to these functions, MCC plans to organize in the building events such as book launches, round tables and conferences. These events will be open to the public and contribute to the vibrant cultural life of the city, thus further strengthening the regional position of Pécs.

The MCC Young Talent Program for upper primary school students has been operating in the city since 2015, with 50 primary school students graduating from the courses launched since then. Currently, nearly 100 young people in four grades are participating in the courses of the center in Pécs. In the future, MCC also intends to launch its Secondary School Program - which currently has more than 60 students from Pécs - and University Program in the Baranya county seat.

The structural condition assessment of the building has been completed in September 2021. The main building has significant structural damage. Problems caused by ground moisture, groundwater, and waterlogging require major structural reinforcements. Our primary aim is to restore the historic façade and renovate the interior.

The part of the building that was added in 1973 is practically unsalvageable due to decades of neglected maintenance. Its structure is severely deteriorated in several places. According to unanimous expert opinion, this part of the building is dangerous. Rainwater, ground moisture and waterlogging are a major problem. The design of the connection with the historic part of the building is inadequate. Rainwater and lack of maintenance caused problems in the former gym as well, it is unusable in its current state, and needs to be demolished and rebuilt. The structure of the former garrison hostel is in a badly deteriorated state and demolition is also recommended due to the problems caused by rainwater.

The Officers' Casino of Pécs has been unused for a long time and undeservedly neglected in spite of its rich historical past and great cultural value. With the complete renovation of the building, an important architectural heritage will be preserved in the city.

With the new buildings, MCC will become part of the city's cultural life, providing a community space for talented young people and open programs for residents. The primary aim of the development is to provide a home for MCC's high-quality training courses in the new building. It is envisaged that each program (Young Talent Program, High School Program, University Program) will be located in separate rooms.

The building will also include a versatile, larger hall, suitable to host receptions, meetings, film club, and musical events.

We will also pay particular attention to environmental sustainability: we aim to use renewable energies, natural and healthy building materials and energy-saving solutions. The façade panels will be fitted with new shading, a passive cooling system will be installed and we also establish the possibility of air conditioning by plants. In the design of the interiors, sustainable shading, passive cooling and improved air quality in the communal areas are of primary importance.

Through the renewal of the building, MCC also intends to heal the wounds caused during of the communist era. We would like to recover and restore the elements and decorative objects that symbolize the building's old splendor and function. Our aim is that in a few years' time, the legendary Officers’ Casino may once again shine in its former glory, whilst providing free development opportunities for talented Hungarian youth and building local community. 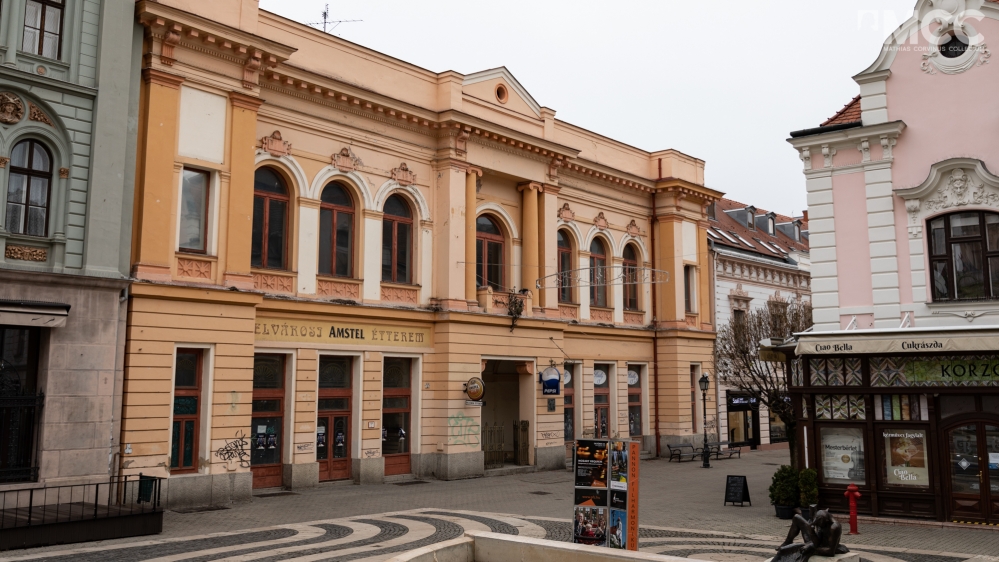 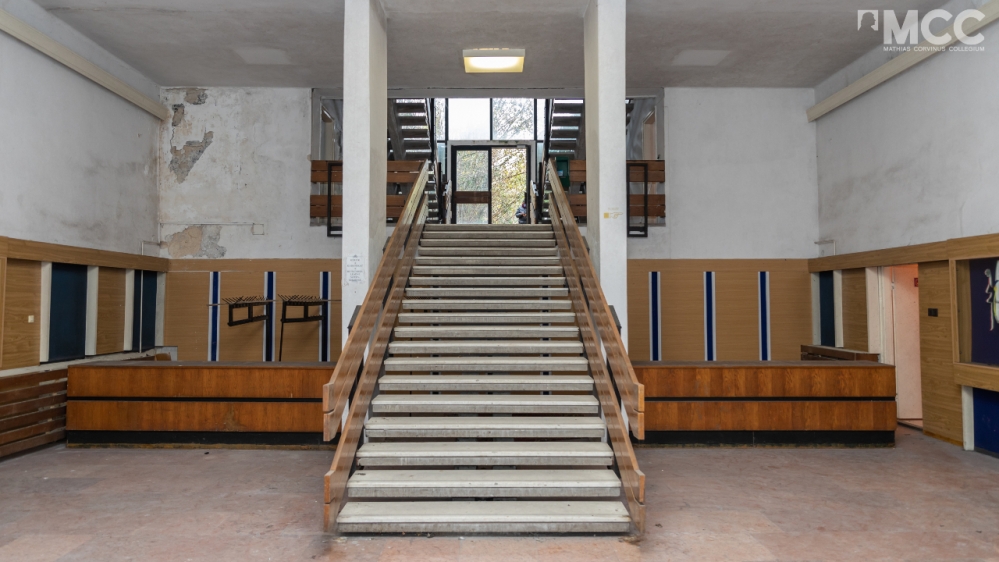 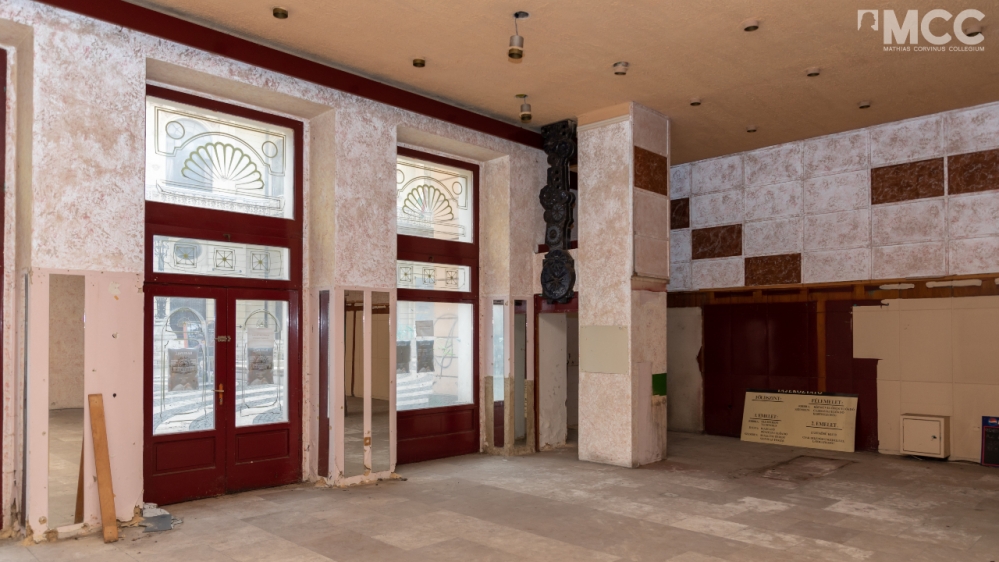 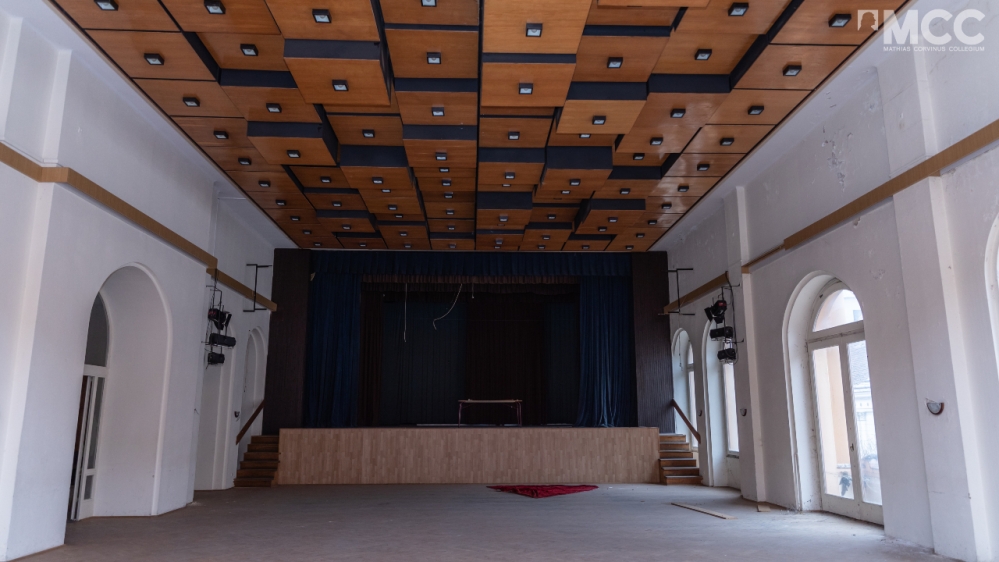 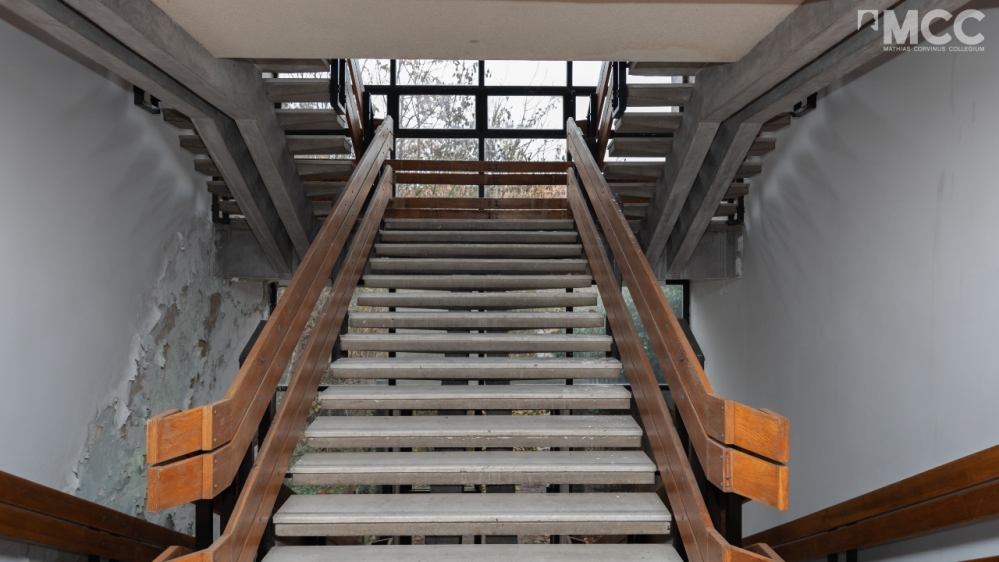 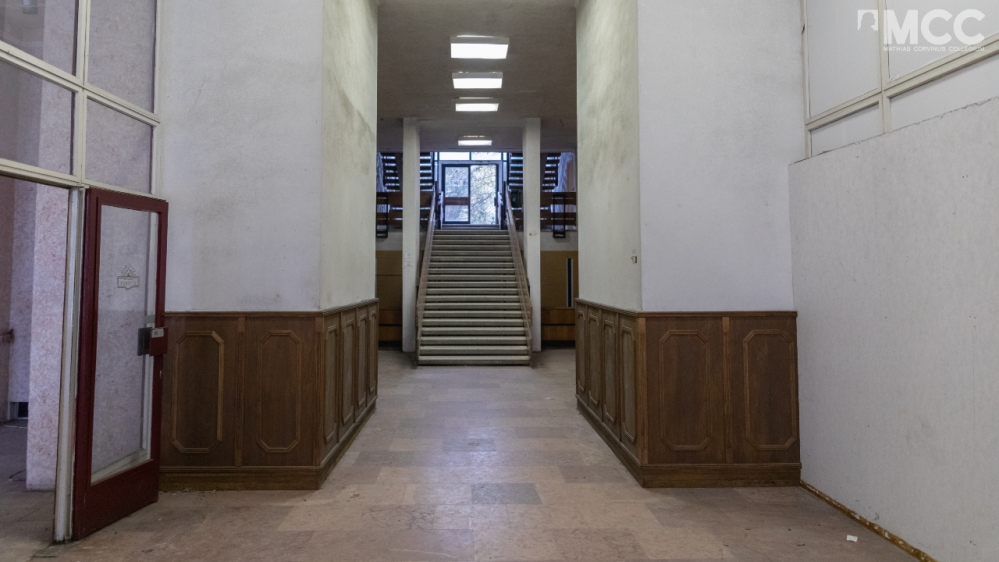 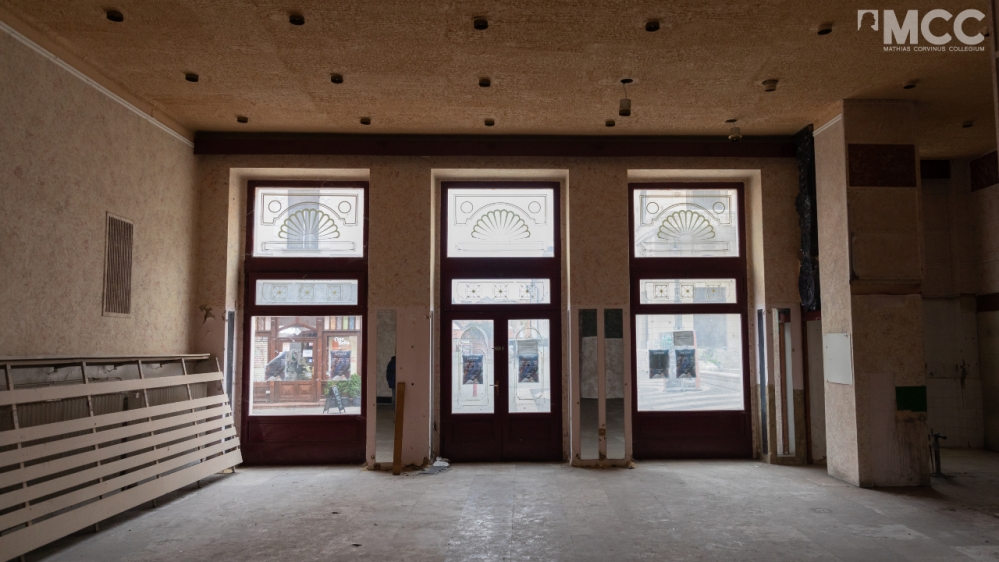 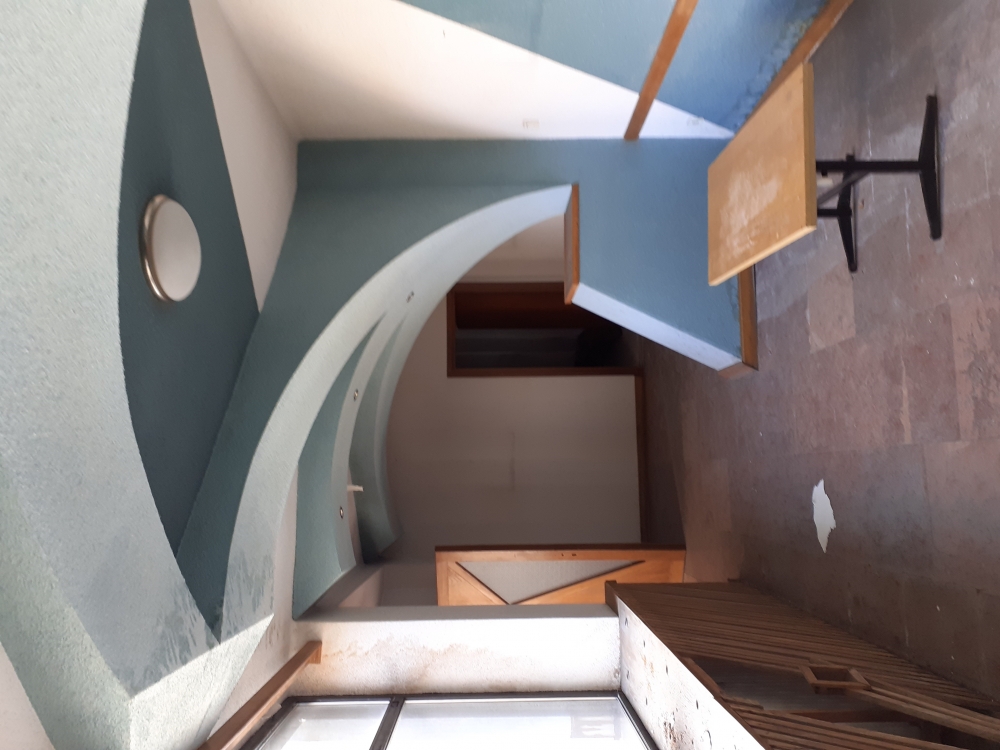